74 students to benefit from Penang Future Foundation scholarships this year 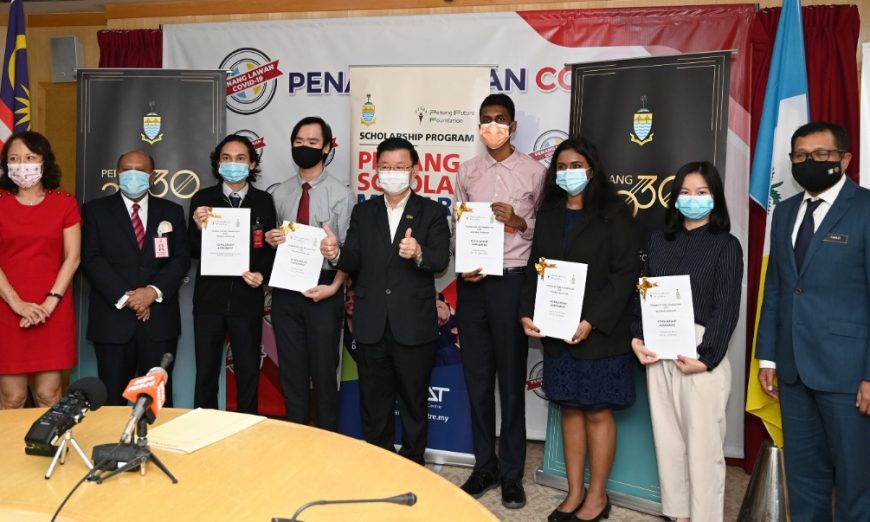 A TOTAL of 74 students have successfully been selected to receive the Penang Future Foundation (PFF) scholarships this year.

Chief Minister Chow Kon Yeow said the students were selected after the selection process concluded in September this year.

“The projected value of the awarded PFF scholarships this year stands at RM3.4 million.

“In its sixth year, PFF continues to award scholarships to outstanding and deserving Malaysian youths for them to pursue undergraduate bachelor’s degree in the fields of Science, Technology, Engineering, Mathematics, Accountancy and Finance,” Chow told a press conference at his office in Komtar today.

There are two categories of scholarships – the PFF Penang Scholar and the PFF Mutiara Scholar. 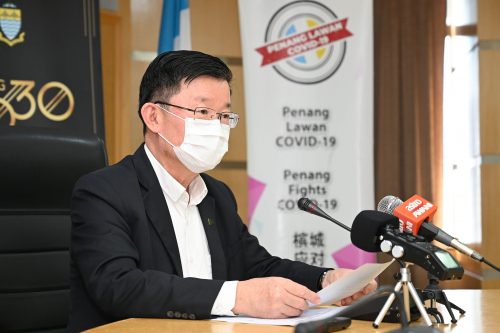 “This year, engineering recorded the highest number of successful scholarship recipients with 40 students.

“Forty-seven recipients are students of public universities while 27 are from the private universities,” he added.

Chow extended his heartiest congratulations to the successful recipients.

“I was made to understand that it has been challenging for the selection committee this year. The pool of applications received nationwide has been rather competitive,” he said.

Chow advised the recipients to remain firm in their commitment.

“This scholarship can help you in your journey to a brighter future. Remain firm in your commitment. Your areas of expertise will be essential for the state’s growth.

“I hope that you will grow to be responsible adults and be leaders in your respective fields,” he said.

Chow said the PFF has benefitted 585 scholars (including the 74 recipients) since its inception in 2015.

“PFF will continue with its goodwill to aid outstanding and deserving Malaysian youths to pursue tertiary studies in public or private universities in Malaysia,” Chow added. 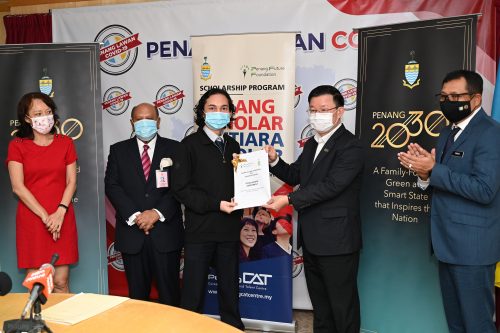 InvestPenang chief executive officer Datuk Loo Lee Lian, who is also the PFF committee member, said that in the past five years, PFF has benefitted a vast majority of students from the science, technology, engineering and mathematics (STEM) background as well as accountancy and finance.

“This is part of our efforts to bring in talents that are widely required to serve the various industries that have a greater say in contributing to the economy.

“As for this year, we have given more to students from the engineering background as well as information technology, accounting and finance as there are demands for it,” she said during her speech.

She also added that the main condition for the recipients is that they must dedicate a certain number of years to work in Penang (depending on their courses); and not necessarily for the government only but can also be for any entity, organisation or factory.

Due to the ongoing Covid-19 pandemic, all 74 students were not able to attend the press conference.

Out of the five students that were selected to be present, Muhammad Naqib Tasdiq Ahmad Adli, who is a mechanical engineering student, thanked the Penang government and PFF for the opportunity and vowed to play a role in Penang’s transformation as a major hub for research and development of new technology.

“I aspire to become a mechanical engineer in the future and will definitely work in Penang to contribute my skill set in areas relevant to my field of work,” he added.

NI Penang managing director Rajesh Purushothaman, who is also the APAC Manufacturing vice-president, said although the Covid-19 pandemic has impacted every business globally, NI still believes that its contribution is critical for the long-term to help the state in its STEM (science, technology, engineering, mathematics) initiative.

“NI has been active in doing its part for Penang institutions since 2010. We want to strengthen the Penang Future Foundation and help the state retain talent. We’re looking to their exciting programmes,” Rajesh said during the mock cheque presentation at Komtar. Chow says the Penang Future Foundation scholarship fund is to help the state government achieve its objective of attracting, building and retaining talent.

“The ongoing pandemic has financially affected many Malaysian households and it is critical that the PFF scholarship programme remains in place so that our scholars are not denied of educational opportunities during this challenging time.”

Chow said the PFF started in 2015 with an initial funding of RM40 million as the state government’s initiative to aid outstanding and deserving Malaysian youths to pursue tertiary studies in public or private universities in Malaysia.

So far, he said 511 scholarships had been given out in the past five years and selected scholars come from STEM background as well as accountancy and finance.

He said the main condition for the recipients is that they have to work in Penang for five years, not necessary for the government but can be for any entity, organisation or factory.

Chow added that the state has not done its second round of appeal for donations but from time to time, it does receive some contributions.

“Now in its sixth year, this scholarship fund intends to help the Penang state government achieve its objective of attracting, building and retaining human talent,” he said.

Penang Future Foundation (“PFF”) started in 2015 as the Penang State Government’s initiative to aid outstanding and deserving Malaysian youths to pursue tertiary studies in public/private universities in Malaysia. With valuable contribution from the private sector and donors, especially the Penang Turf Club, and recognizing the importance of education and the need to retain local talents, PFF has awarded approximately 500 scholarships over the last 5 years. Selected scholars come from a diverse range of backgrounds and are enrolled in fields of Science, Technology, Engineering, Mathematics, Accountancy and Finance.

Entering its sixth year, this scholarship fund intends to help the Penang State Government achieve our objectives of attracting, building and retaining human talent. Based on the recently released approved investment report for year 2019 by the Malaysian Investment Development Authority (MIDA), Penang has successfully recorded the highest amount of Foreign Direct Investment (FDI) in the country for the manufacturing sector which is RM15 billion. The total amount of approved investment (domestic and foreign) in the manufacturing sector for the state is RM16.9 billion involving 166 projects. These two figures, to date, are Penang’s highest achievement in our state’s history. This is a proven testament of foreign investors’ high confidence towards the investment ecosystem which Penang offers. By materializing the 2019 approved manufacturing investments of RM16.9 billion, it is estimated that 18,886 new job opportunities will be created in Penang, according to MIDA. While Penang has no natural resources, we have a skilled workforce and talents which are often envied and a great pull factor for investors.

In light of the ongoing global Covid-19 pandemic which has financially affected many Malaysian households, the PFF scholarship programme becomes a critical platform that ensures our scholars are not denied of educational opportunities during this challenging time. At the same time, the Penang State Government will continue to work hard in ensuring that our state economy remains resilient in face of the new normal due to this pandemic.

Since its inception in 2015, the availability of a stable and skilled workforce is a key criterion in attracting capital investments. Investors are attracted to locations that have a suitably skilled talent pool, and PFF’s scholarship awards and workforce development initiatives are part of the State Government’s efforts to foster a sustainable and conducive ecosystem that will attract high-quality, strategic investments, in line with the State’s industrial development goals. Since its inception five years ago, PFF has disbursed scholarships to more than 500 scholars and 170 PFF scholars who have graduated from their respective universities have also successfully secured employment with companies of their choice in Penang.

Prospective students may apply to be either a ‘PFF Penang Scholar’ or ‘PFF Mutiara Scholar’. Interested candidates are advised to check the eligibility requirements for each category. Both categories have different eligibility criteria based on, among others, candidates’ financial background and scholastic record. ‘PFF Penang Scholar’ caters for those with CGPA of 3.67 and above whereas ‘PFF Mutiara Scholar’ is available for applicants whose CGPA is between 3.00 to 3.66. Successful applicants will receive benefits that correspond with the scholarship awarded to them. Detailed information on benefits and terms of the scholarship is available at PFF’s website (www.penangfuturefoundation.my).

Application window for PFF Scholarship 2020 will open from 1 June 2020 to 22 June 2020. Interested students are encouraged to keep a lookout for periodic announcements through PFF’s website at www.penangfuturefoundation.my; Buletin Mutiara’s distributed free copies; and social media websites including Facebook and Twitter.

PFF 2019 Selection Interview was held on on 1 August (Mutiara Scholar), 5 and 6 August (Penang Scholar) 2019 at Penang Skills Development Centre (PSDC). This is a face-to-face panel interview headed by members of the PFF Selection Committee and leaders from industry, academia and community. Shortlisted PFF 2019 applicants were required to attend the interview for their final round of evaluation for PFF Scholarship 2019.

The PFF organizes PFF Luncheon annually to thank the Selection Committee and co-interviewers for their contribution and support for the PFF Scholarship Program. For 2017, the PFF Thank You Dinner was held at Suffolk House, Penang. Amongst the attendees were Members of the PFF Selection Committee, PFF 2017 Co-Interviewers, PFF Graduates and PFF 2017 Bootcamp Working Committee.